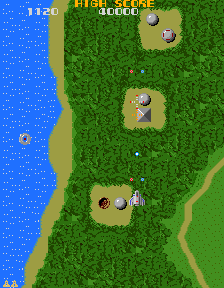 Super Xevious (スーパーゼビウス Sūpā Zebiusu) is a vertical scrolling shooter arcade game that was released by Namco in 1984. It runs on Namco Galaga hardware, and as its name suggests, it is the sequel to Xevious (which was released two years earlier). The gameplay is very much like that of the original Xevious except this time it is a little more difficult. Several new enemies have also been introduced (including a silver Galaxian flagship, a rare silver Galaga "scorpion" ship, two jet planes, a helicopter, and a dark yellow Tank Battalion tank). Some of these enemies will reset the player's score back to 0 if they are destroyed - and the hidden "Sol Citadel" towers and Rally-X Special Flags are also located in different places. The game's electronic chiptune music was composed by Yuriko Keino and Junko Ozawa. Former Happy End and Yellow Magic Orchestra member Haruomi Hosono recorded an arranged dance/synthpop version of the game's theme tune, which was released in Japan by Alfa Records' Yen label as a 12" single on August 29, 1984. The single was also released in Europe by Pick Up Records that same year.

Once again, inhabitants from the planet Xevious, controlled by the super-computer GAMP, are attacking the Earth, their ancient home planet, willing to re-capture it by force. The SOL towers have emerged from the ground on our planet, remotely controlled by GAMP, aiding the Xevians in their invasion. Only the brave pilots of the Solvalou aircraft are able to avert this new threat!

Super Xevious is a 2D vertically-scrolling shoot 'em up. Power-ups such as bombs, lasers, and shields can be collected; the latter protects the aircraft from immediate destruction if hit by an enemy. Other power-ups for the Solvalou include a rear shot and a bigger lock-on. Some stages are completed by fulfilling certain requirements, rather than simply proceeding, eliminating all enemies; if these are not met, the stage will loop indefinitely, sending progressively harder enemies. These objectives typically include locating and destroying a number of SOL towers; the target sight will flash when it goes over these structures.